Showing posts from March, 2020
Show all

Curious George And The Man In The Yellow Hat 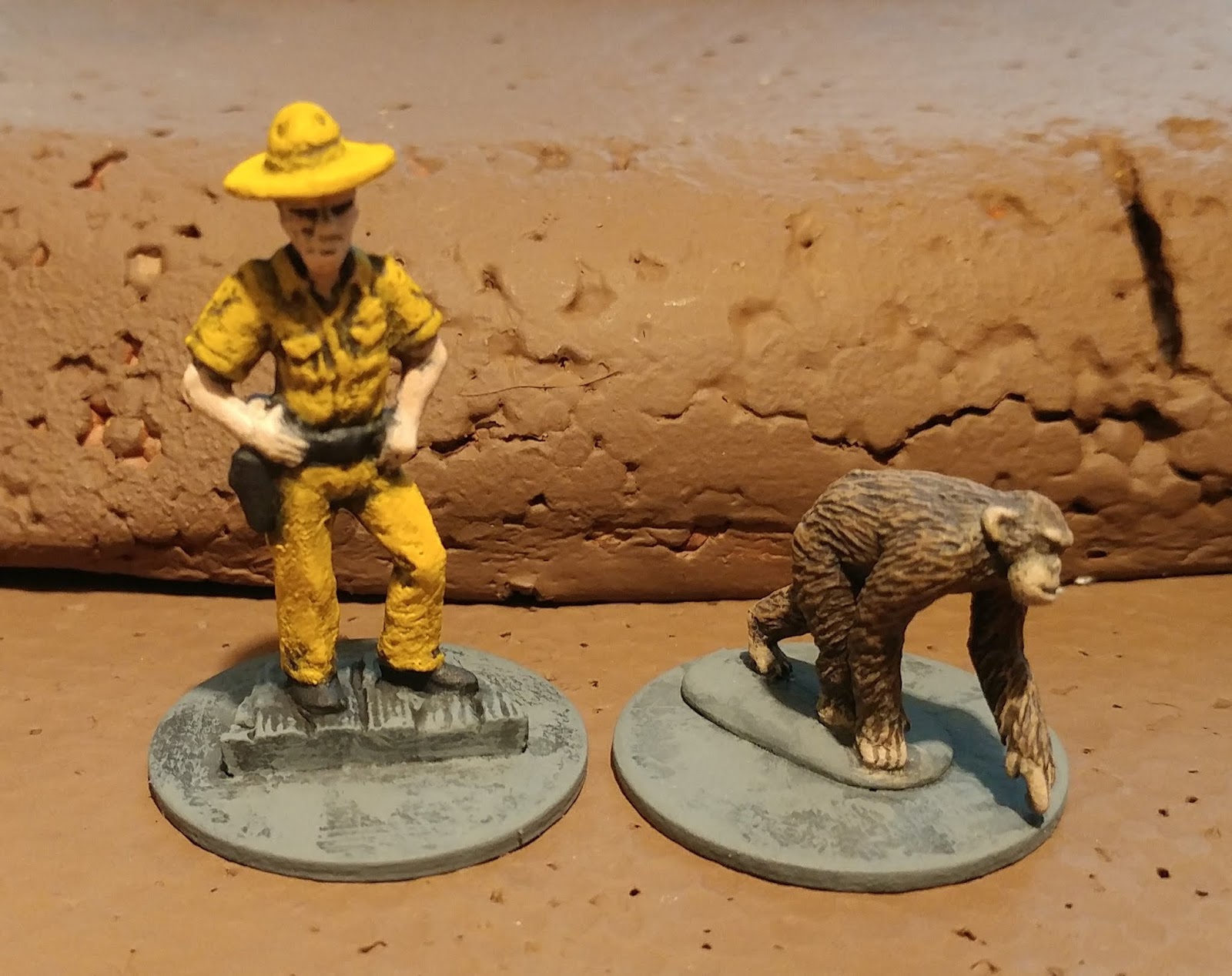 As a kid, I loved the Curious George books. This was long before there was a television show, and there weren't that many to read. The Man In The Yellow Hat kind of reminded me of my father; he was an outdoorsy guy who brought home strange pets and always seemed to know how to fix situations that had gone wrong. Anyway, a few years back on the Lead Adventure Forum, someone suggested Curious George and the Man In The Yellow Hat as a Duo for the Pulp Alley game. I don't play that game, but it struck me as a splendid idea to get a couple of appropriate miniatures and paint them up as this pair. And after I acquired them, they sat in a drawer for a couple of years. But I decided I really wanted to finish them up, so here they are. The Man In The Yellow Hat is from Reaper, and Curious George is from Eureka.
Post a Comment
Read more 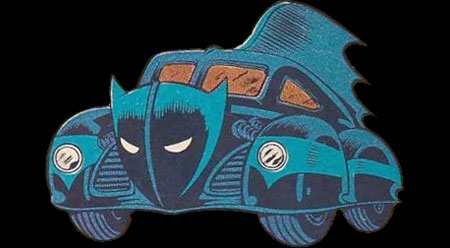 OK, so this month over on the Cardboard Warriors forum, the theme for the monthly Hoard is Cyberpunk. But then one of the people posted some Batman stuff , and a lot of us got kind of excited about that instead. And that got me to thinking... since they had a couple different versions of an early-80's-style Batmobile already converted from existing papercraft sports car templates, maybe I could do the same. And since I am particularly fond of the 1948 Batmobile, I figured that would be the one to go for. 1948 Batmobile, it is not much to go on but I like it One of the Cardboard Warriors is Grandelsmother64, and about eight years ago he did some generic papercraft 1930s/1940s cars . So I figured one of those would be a good basis to start from. And one thing led to another, and I made all the conversion pieces. I prefer my Batmobiles to be black, not blue or with stripes (except the 1966 TV Batmobile, with it's red trim, that will always be the Best Batmobile,) so that&
Post a Comment
Read more 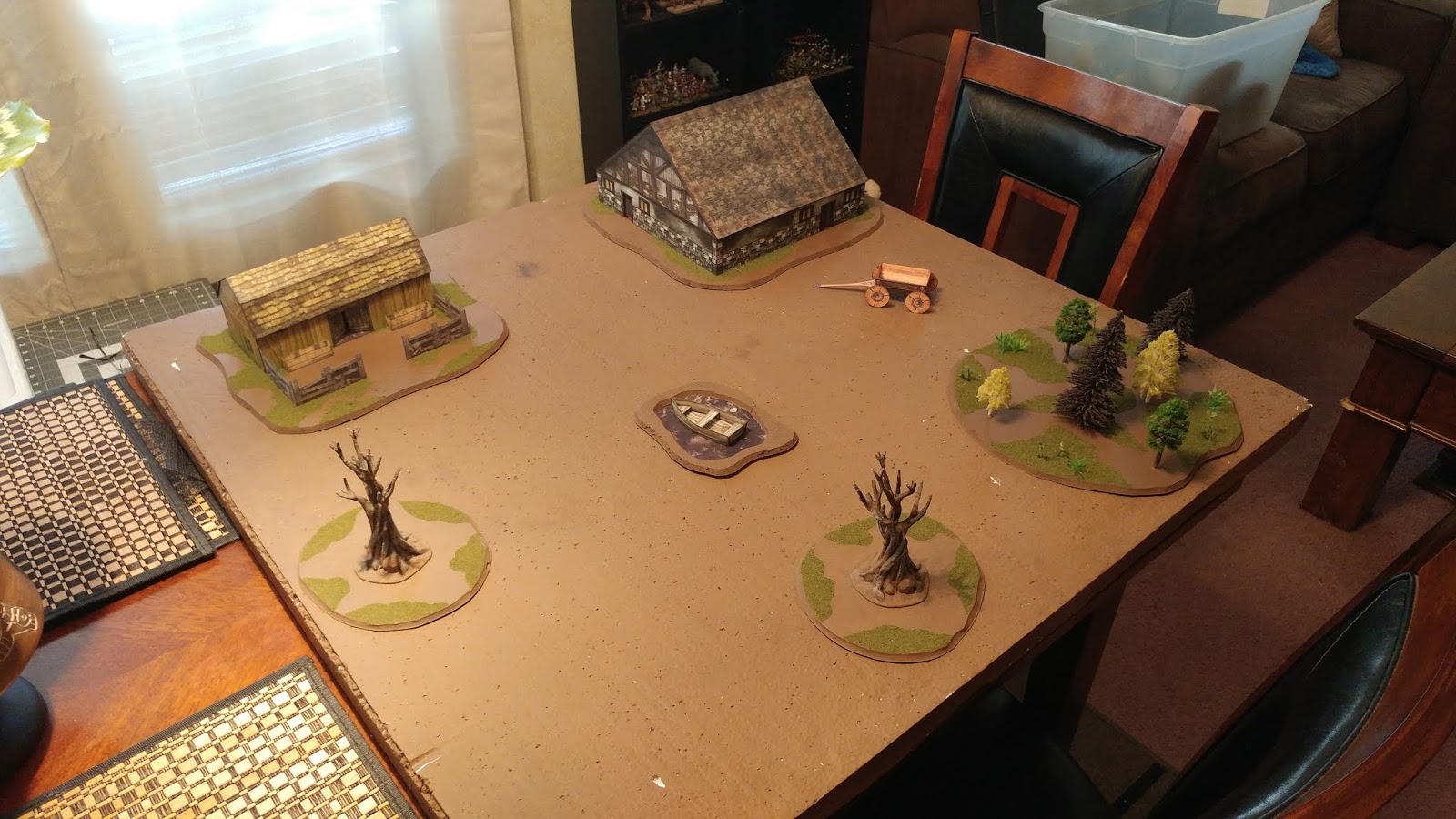 Alrighty, so it looks like I have everything but the miniatures for the Blood Moon mission in Rangers Of The Shadowdeep. It looks a little empty.  I think I need a bigger pond. Ponds are an absolute pain in the ass to make. I also added a couple of dead trees, it adds to the ambience I think.
Post a Comment
Read more 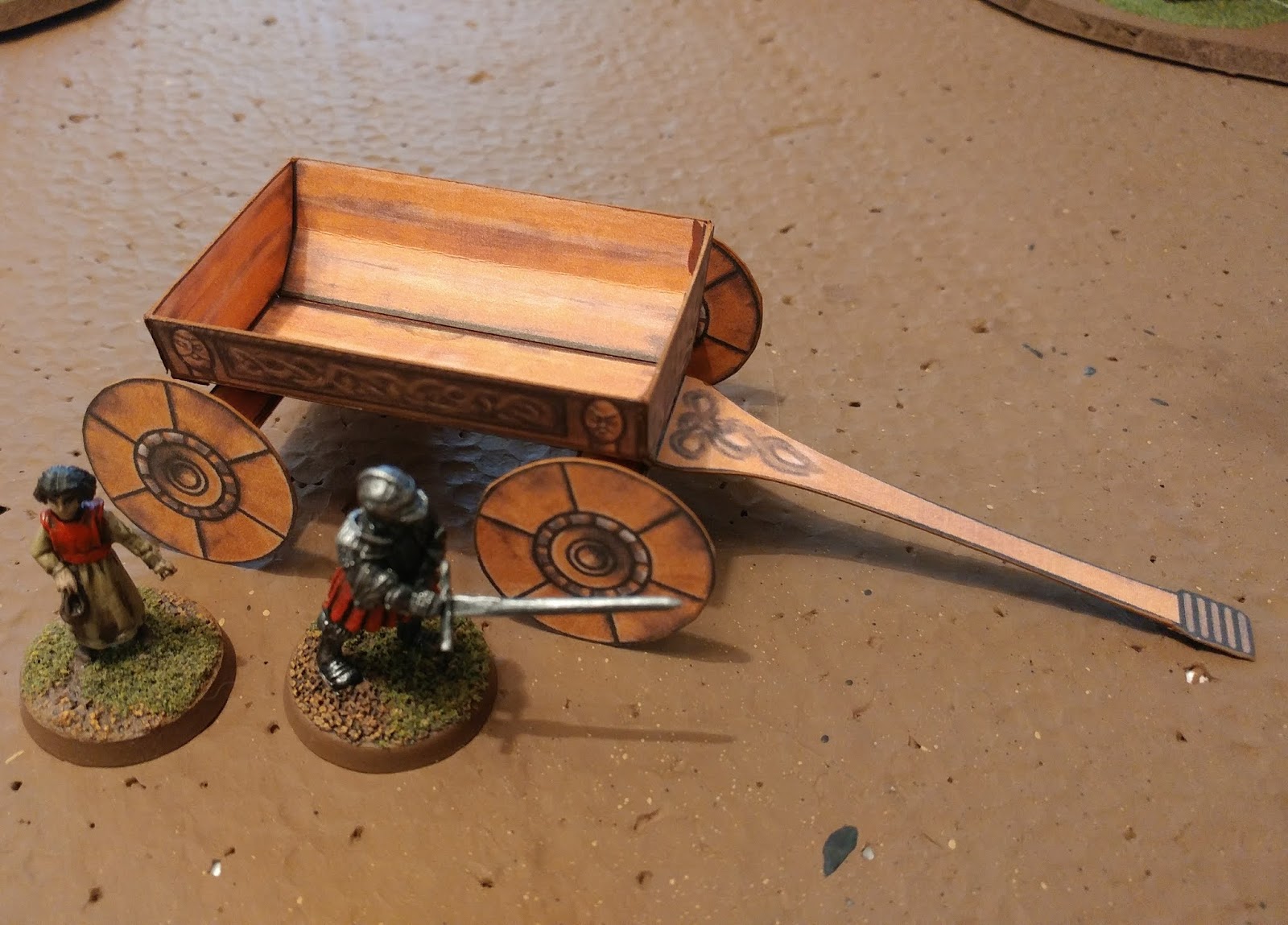 I finally finished my papercraft Viking Loot Wagon. I think the axles could stand to be a bit shorter. And maybe scale the whole thing down by 20%. My friend Truls, who lives in Norway and knows a thing or two about the Norse, has mentioned to me on FaceBook that the Vikings knew about spokes. So maybe this can be better thought of as the Fantasy Viking Loot Wagon.
Post a Comment
Read more 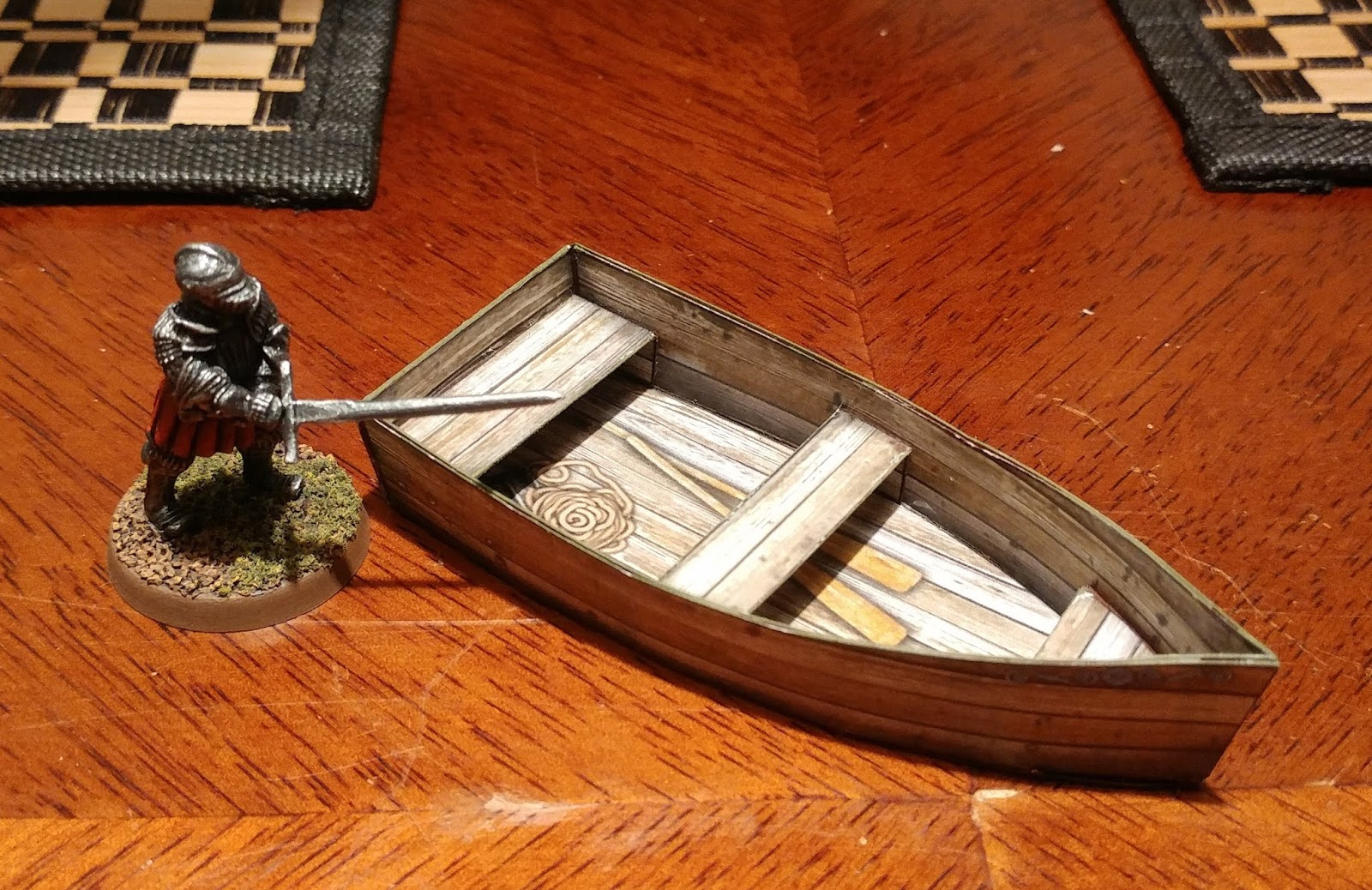 I have finished the final scenic piece I was missing for the Blood Moon mission from Rangers Of The Shadowdeep: a small boat. This one is a papercraft model made from the Smuggler's Rowboat kit by Dave Graffam Models. Very unusually for me, I made no modifications to the template before I built it.
Post a Comment
Read more 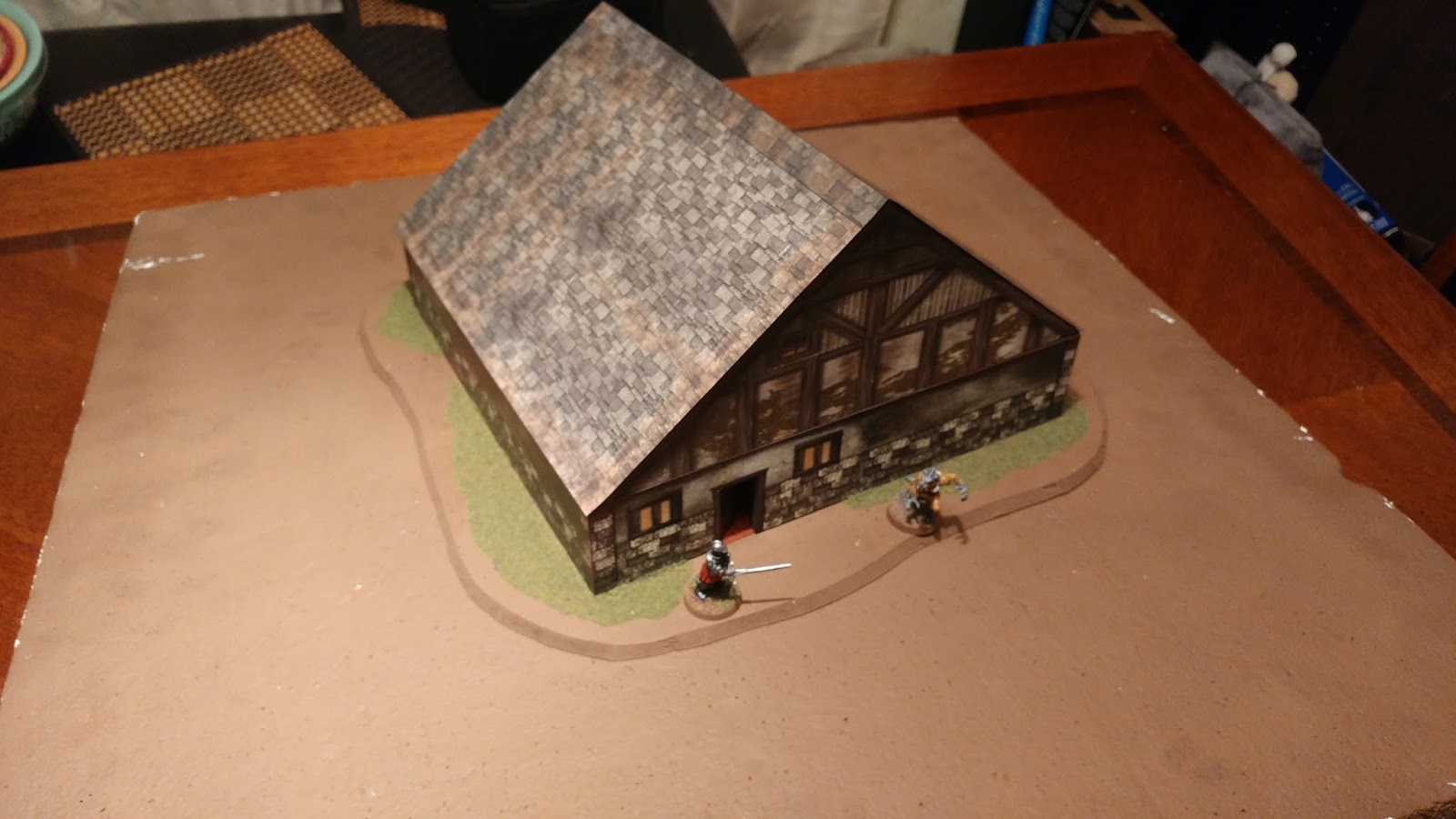 So... I finished the manor house for the Blood Moon mission from Rangers Of The Shadowdeep. It's a combination of papercraft templates from Thoumont's from WWG and the tavern from WotC, with plenty of reworking, resizing, and recombining. The building itself is 10" square, all of the doors open and close, and obviously the roof is removeable.
Post a Comment
Read more
More posts